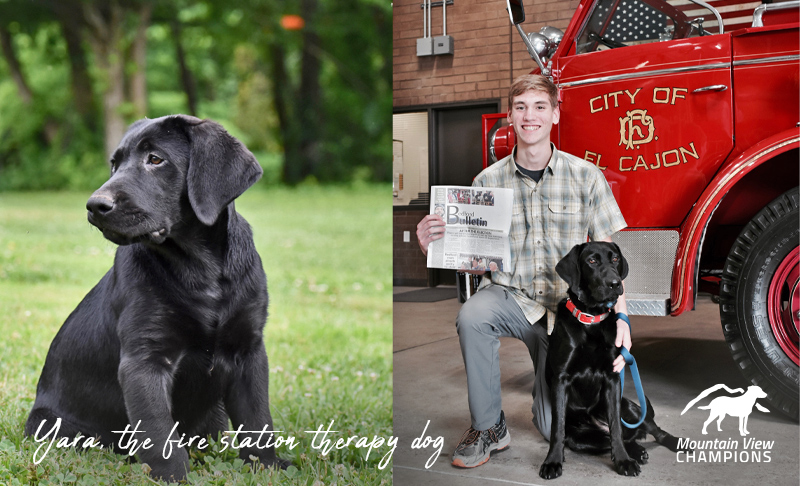 Mountain View Champions was featured in the Bedford Bulletin newspaper. Check out the story of how one of our Labrador pups, Yara, was chosen, and trained to become a therapy dog at a fire station in California:

Fighting flames, responding to emergencies, and spending time at roadside accident scenes leads to serious strain on firefighters across our nation. Research shows that the mental and emotional stress of this occupation translates to negative health risks including depression and suicide.One fire station in San DiegoCounty, California is using an innovate approach to reversing those trends and a Bedford County canine is the primary care source.

Nine month old Labrador Retriever, Yara, has been specifically selected to serve as a “Warrior Angel” on permanent assignment to the El Cajon Fire Station and arrived on October 19.She is the first dog serving in this capacity in California.

Yara has been certified as a therapy animal and has received extensive training which included responding appropriately around the loud sirens and action-oriented nature of a working fire station.

“She passed her tests and was an absolute rock star” remarked Sonny Madsen, founder of K-9 Caring Angels which prepares canines of various breeds to serve in many capacities. Those include serving combat veterans, youth with disability, individuals struggling with PSTD, and as therapy visitors within institutional settings.Yara has received training through K-9 Caring Angels during the past four months.

Yara was born in Montvale this past February to 15-year-old Caleb Jacks. He raises purebred AKC English Labrador Retrievers which are adopted primarily by families to serve as lifelong companions.Earlier this year, K-9 Caring Angels contacted him directly inquiring about puppy availability.

Caleb had one black female not yet reserved and after complete inspection on the property, Yara was chosen. She exhibited a playful temperament and healthy disposition which are both essential for a successful match.

This month Caleb and his family took a cross-country trip to California which included a stop at the El Cajon Fire Station to see Yara and visit with the El Cajon firefighters.

Caleb said when they arrived at the fire station, Yara’s trainer brought her out and she seemed to remember him—it had been six months since Yara and Caleb had last seen each other. Yara continues to take classes every Saturday.

Caleb said he got to see where Yara stays when the firefighters are out on a call. He added that she has been trained to go straight to her crate so they can quickly get her safe before they leave.“When the siren rings she goes straight to her crate and the firefighters can close her door,” he said. “They are really enjoying having her there. This next month they will be doing a survey so they can write in what they think. From everything they’ve seen, they’ve really enjoyed her.”

“I’m really proud to know that she is helping other people. It’s a whole new level of service,” Caleb said.

According to a story that appeared in the San Deigo Union-Tribune,Yara will serve as an immediate de-stresser for firefighters following a critical incident and will live at the station 24 hours a day, seven days a week to provide companionship. The goal is for Yara to help lower the incidence of depression, lower blood pressure, increase levels of serotonin and dopamine, and decrease heart disease in fire personnel.

The Union-Tribune story noted that of 7,000 firefighters in an International Association of Firefighters survey, 95 percent said they have been “incredibly stressed” with 81 percent in fear of their fitness for duty and 78 percent not educated on mental illness. In 2019, there have been 33 firefighter on-duty fatalities in the United States. The Firefighter Behavioral Health Alliance, based out of Arizona, counts 71 firefighter and 31 emergency responders as being lost to suicide so far this year.